Come Out to The Castro Walking Tour 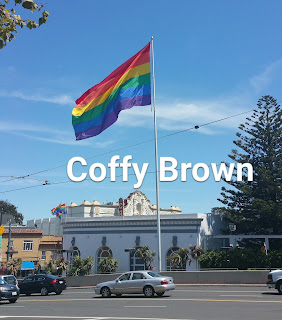 The Castro District commonly referenced as The Castro is a neighborhood in Eureka Valley in San Francisco, CA. The Castro is one of the first gay neighborhoods in the United States and has been one of the most lively for several decades. But, the Castro has not always been the epicenter of the Gay community and activism. I became curious about how the Castro became such a prominent symbol of of gay activism and events in the world. So, I decided to learn more about it. to that end, on Saturday, July 11, 2015, your Ms. Brown decided to take the  Come Out to the Castro Walking Tour.

The Gold Rush
Castro Street and  was named for Jose Castro (1808–1860), a California leader of Mexican opposition to U.S. rule in California in the 19th century, and alcalde of Alta California  from 1835 to 1836. The neighborhood now known as the Castro was created in 1887 when the Market Street Railway Company  built a line linking Eureka Valley to downtown. However,  much of the growth of San Francisco and the expansions that later took place were the result of the now world famous "Gold Rush". The California Gold Rush  (1848–1855) began on January 24, 1848, when gold was found by James W. Marshall at Sutter's Mill in Coloma, California.  All told, the news of gold brought some 300,000 people to California from the rest of the United States and abroad. Of the 300,000, approximately half arrived by sea, and half came overland from the east.

The effects of the Gold Rush were substantial. San Francisco grew from a small settlement of about 200 residents in 1846 to a boom town  of about 36,000 by 1852s   However, that boom town did not feature many women. The men often found ways to entertain themselves. One of the most favorite past times was square dancing. The men used an at first a simple handkerchief code. A mustard yellow hanky in your left pocket meant that you were the lead while dancing. The same hanky in your right pocket meant that you took the more submissive role in dancing and were the follower. Eventually, these codes transitioned into meaning other things of a more sexual nature. In fact today,the hanky code has become quite extensive. Below is the partial  list of hanky codes and what they mean:

For a full list of handkerchief codes and meanings along with events go to :
The Eagle San Francisco
P. S.- if you don't know what something means, don't ask me. I don't either. As I always say, that's why God created Google.

After the Gold Rush, the Castro District transitioned into an average working class community. In the early 20th century - especially from c. 1910 to 1920s - the Castro District of San Francisco and some of the surrounding area was known as Little Scandinavia, because of the large number of residents of Swedish, Norwegian and Danish ancestry. Later,  the Castro became home to a large number of Irish Catholic families. Much of the Irish Catholic roots of the area can be seen in the large number of bars that exist in the Castro presently (no shade.) Those establishments and their corresponding liquor licenses are remnants of the large number of Irish Pubs that existed in the community in times past. One establishment that clearly exhibits the Irish Catholic Roots of the Castro is the Twin Peaks Tavern located on the corner of Castro and Market. The tavern features vintage antique woodwork throughout along with corresponding vintage furniture. If you visit the Castro, let me just suggest that you at least go into the Twin Peaks Tavern and take a look. The woodwork is outstanding. 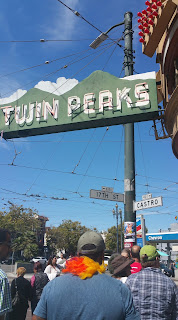 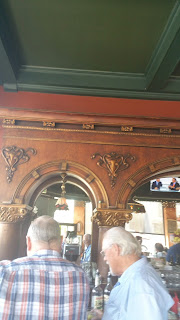 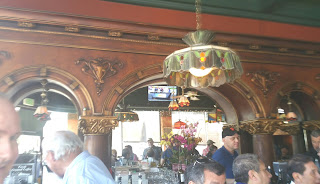 World War II provided a big impetus for the development of San Francisco's gay community. One and a half million soldiers, 10%+ of which were homosexual, were able to find each other more easily in the marginal districts of San Francisco. Many soldiers and sailors came to the area and some  formed gay relationships. Later, they were discharged for homosexuality. Ultimately, the  U.S. military dishonorably discharged thousands of gay servicemen from the Pacific theater in San Francisco during World War II (early 1940s) because of their sexuality.  Upon their discharge, the Military sent a letter home to the serviceman's  family members detailing why they were discharged. Rather than returning home where they would be stigmatized, many  stayed on and after the war were joined by thousands more who had discovered new identities during the war.   The city was always known for its relatively libertine attitudes towards sex and pleasure. The Barbary Coast and the waterfront brought together travelers, sailors, transients, and other casual encounters far from the prevailing  rules "back home". Hundreds of houses of prostitution flourished from the Gold Rush through the early 20th century,followed decades later by the rise of topless bars and strip joints, the pornographic film industry ( The Mitchell Brothers being the best known), all contributing to the sexual openness that gave San Francisco a reputation directly challenging the sexual repressiveness that prevailed in the rest of the country.  This in turn made San Francisco an attractive destination for those deemed "outlaws" by the dominant morals of society. San Francisco ultimately  developed an established gay community  in numerous areas including Polk Street, the Tenderloin and south of Market Street. The 1950s saw large amounts of families moving out to the suburbs in what became known as the "White Flight", leaving open large amounts of real estate and creating attractive locations for gay purchasers. By 1963, the Castro's first gay bar was opened called the "Missouri Mule".

The Castro's graduated to it's status as a gay mecca began during the late 1960s with the Summer of Love in the neighboring Haight-Ashbury district in 1967. The two neighborhoods are separated by a large mountain, topped by Buena Vista Park. The hippie and free love movements had fostered communal living and free society ideas including housing of large groups of people in hippie communes. Androgyny became popular with men even in full beards as gay hippie men began to move into the area. The 1967 gathering brought tens of thousands of middle-class youth from all over the United States to the Haight which saw its own exodus when well-organized individuals and collectives started to see the Castro as an oasis from the massive influx. Many of the hippies had no way to support themselves or places to shelter. The Haight became drug ridden and violent, chasing off the gay population who looked for a more stable area to live.
The gay community created an upscale, fashionable urban center in the Castro District in the 1970s. The neighborhood previously known as Eureka Valley, became known as the Castro, after the landmark theatre by that name near the corner of Castro and Market Streets. Many San Francisco gays also moved there after about 1970 from what had been the formerly most prominent gay neighborhood , Polk Gulch, because large Victorian houses were available at low rents or available for purchase for low down payments when their former middle-class owners had fled to the suburbs.In 1962 police and alcohol control board harassment led to the establishment of the Tavern Guild, consisting of the owners of primarily gay and bohemian establishments. The Guild became the first overtly gay business association and provided one of the first organizational backbones of the gay community. Earlier, in 1955, the Mattachine Society (one of the first ever gay organizations) had moved its headquarters from Los Angeles to San Francisco and eventually spawned The Advocate, the nation's first gay magazine. The Daughters of Bilitis, the first openly lesbian organization, was founded in San Francisco, also in 1955.

So, the above is just a teaser of all the information that I took away from the "Come out to the Castro Tour'. And truly, we discussed far too much to insert into one blog post. I learned that the size of each patch on the AIDS quilt is equivalent to the size of a grave. I learned that the Walgreen's in the Castro is the most profitable in the country as a result of filling prescriptions for AIDS and HIV medications. I learned that Jewish Holocaust victims who were gay were forced to wear pink triangles. ( Google Pink Triangle Park). And, all the information was presented in a fascinating  and engaging form. We had funny quizzes and jokes that each tour participant were challenged to answer or perform. The winner was allowed to wear the "boa of fame". I never answered a question correctly, so I never had my turn with the stupid "boa of fame". ( I'm still bitter, can you tell?) The "Come out to the Castro " Tour happens every Saturday. The price is thirty dollars per person or fifteen on Goldstar(what I paid.) I had a fabulous time, learned a lot, and got a bit of exercise in the sun. I plan to take all of the other walking tours of various neighborhoods in San Francisco, and perhaps I will get the 'boa of fame" or some similar achievement next time! One can always hope! As Always...
Keep it Hot and Sweet!
Ms. Brown 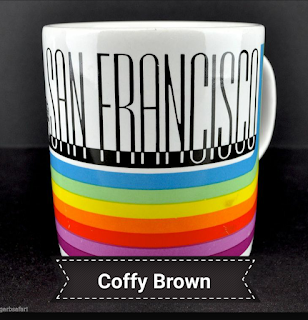