Judi Oshowole on life in Barcelona

Judi Oshowole founded Barcelona International Black Sisters, a group of women of African descent living in Barcelona, Spain. I will be visiting Spain next month, and I must admit that I am very curious about the black experience there. I won't be going to Barcelona, but I will be going to Madrid, Cordoba, Seville, Coimbra, Obidos, and Lisbon, Portugal. My post will be a bit different while I'm on vacation. I plan to give you a daily log of my adventures. I hope that you enjoy it as much as I will! 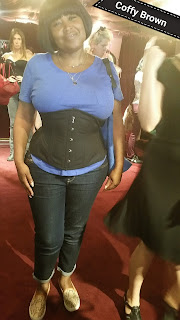 It seems that the hourglass figure has  once again become en vogue ( keeping it real, it never went out of fashion in the black community) and as with any other form of beauty, women are making great efforts to achieve it. One trend that I have noticed of late is the craze toward waist training. Waist training is the gradual process of waist reduction using a waist cinching corset.The waist training practice came into prominence in Victorian times but has made a something of a comeback in recent years.  The resurgence of this trend  interested me, and I thought that I would do a bit of research and tell you about it.  As I said earlier ,the waist trainer is merely the modern day equivalent of a corset.  Corsets have been around for at least four hundred years. I am most fascinated with the  corsets of the  Victorian era and the resurgence of corsets today.


Prior to 1850, corsets had  the role of bra. As opposed to narrowing the waist, corsets were shaped with bust cups and made from  materials still used today. They were closed with elastic laces and elastic thread was often used in the material to give the fabric more stretch. At the time, exaggerated shoulders and skirts made the waist appear narrow. When the exaggerated shoulders disappeared, the waist had to be cinched more tightly in order to achieve the same effect. This is around the time that the practice of "tight lacing " began to appear. "Tight lacing" is the practice of wearing a tightly laced corset. It is done to achieve cosmetic modifications to the figure and posture or to achieve the sensation of body restriction.

( Yes, some folks are aroused by having their bodies tightly restricted. But, with the advent of "Fifty shades of Grey" this should not come as a surprise.)


A typical training routine begins with the use of a well-fitted corset and very gradual decreases in the waist circumference. Lacing too tight too fast can cause extreme discomfort and short-term problems such as shortness of breath and faintness ( hence all the swooning and the fainting couch that we have heard about in historical fiction), indigestion, and chafing of the skin if a liner is not worn. It should also be noted that lacing too tight or too fast can irreversibly damage a corset and they should be seasoned appropriately.

The primary effect of tight lacing is the decreased size of the waist. The smallest waist recorded is that of Ethel Granger, who tight laced for most of her life and achieved a waist of 13 inches (33 cm): a reduction of over ten inches. Such extreme reductions take a very long time to achieve. At first, corsets with waist measurements four inches smaller than the tight-lacer's natural waist size are recommended. The length of time it will take a tight-lacer to get used to this reduction will vary on his or her ( yes, men wear corsets too) physiology; a large amount of fat on the torso and strong abdominal muscles will mean that it takes longer for the tight-lacer to wear their corset laced closed at the back. Thereafter, reducing another couple of inches is not much more difficult, but each inch after a six-inch reduction can take a year to achieve.


The diminished waist and tight corset reduce the volume of the torso. This is sometimes reduced even further by styles of corset that force the torso to taper towards the waist, which pushes the lower ribs inwards. As a consequence, internal organs are moved closer together and out of their original positions in a way similar to the way that a pregnant woman's expanding uterus causes the organs to be displaced.
The volume of the lungs diminishes and the tight-lacer tends to breathe with the upper portion of the lungs only, rather than the whole. This sort of  breathing is what gives the image of "heaving bosoms"  that are so often mentioned in historical romance novels.  Due to the lower portion of the lungs being used less there is often a bit of  a mucous build-up there; a slight and persistent cough is the sign of the body trying to clear this (and might also have led to the Victorian hypothesis that corsets caused tuberculosis.)
The liver is pressed upwards.  As it continually renews itself, it adapts to fit its new position, and in a long-term tight-lacer it can develop ridges where it rests against the ribs.
The compression of the stomach  reduces its volume, and some find  that eating too much gives them indigestion and heartburn; foods like carbonated drinks and beans can easily cause trapped wind. The compression of the intestines can cause constipation that usually resolves upon removal of the corset. Many tight-lacers will alter their diet in order to avoid these problems, for example going from three large meals a day to six smaller meals.

What has helped waist trainers become so popular of late is the wide endorsement of many celebrities. Kim and Khloe  Kardashian, Kim Zolciak, Snooki,  and Blac Chyna have all admitted to wearing corsets and firmly endorse them.  ( Okay, so the jury is still out on whether or not any of these people are bonafide celebrities, but I suspect that their firm advocacy has certainly cemented the waist training craze in popular culture.)  There are three basic types of waist trainers:


The first two waist trainers that I mentioned run in pricing from about $10 to $150 dollars. I basically consider them to be the Walmart ( latex) and Macy's (corset) of waist trainers.

So, the third type of waist trainer is the Ribbon Corset waist cincher. This is a corset that can be customized after your body shape and size. It has lacing at the back ( just like in the movies) and can tighten to the preferred size. ( it is impossible to put these on or remove them properly alone.) So , if latex waist trainers are the Walmart of Corsetry. And, a basic corset is the Macy's of Corsetry, then Dark Garden Unique Corsetry located on Linden St. in San Francisco is the Sex, Chocolate, Beyonce of Corsetry. On Sunday, July 19, 2015, your  Ms. Brown attended their Annual Corset Rummage Sale and I had a blast! Since it's inception in 1989, Dark Garden has established itself as one of the world's leading corsetiers, specializing in custom figure shaping foundation garments. Each corset is designed to function as a corset should, without sacrificing comfort. Dark Garden has a reputation for making structurally sound yet comfortable corsets which has attracted the attention of celebrities and corset enthusiasts the world over. There are three distinct collection at Dark Garden; The Signature starting at $315, Risqué starting at $430, and the Dolly Mop starting at $365.  All corsets come in 18" to 38" which roughly is a size 2 to 22.  Dark Garden also makes custom corsets in 12" to 40" inch sizes. The price starts at $895.  They also have a full bridal salon.  The sale began at 11 am and I'm told that the line was approximately four hours long.  I arrived in the afternoon and waited only about twenty-five minutes. The issue with that of course is that many of the best items were probably sold by the time that I was able to enter. In any case, the people in line were sooo nice. Someone brought donuts and they were happy to give me the ins and outs of corset wearing. Now, I was surprised to find that both men and women wear corsets, but hey, clearly there is an entire culture of corset wearing with which I'm not familiar! Once I got in, I was fitted for my corset by Tiffany!  After doing my research on corsets and waist training culture, I  must admit that I was a bit concerned about wearing one. Ms. Brown will not wear anything that prohibits her from breathing or eating.Those are two activities that I enjoy immensely. But, I was pleasantly surprised to find that I could breathe easily and I honestly could see myself enjoying a meal in the garment with no problem. It actually felt good to have the additional back support.  Now, as you can tell, Dark Garden Corsets are not inexpensive, even when they're on sale. But,  they were definitely in a class by themselves with regard to fit, style, and quality. So, if you're in the market for a corset, I would recommend that you hold on to your money until you can get one from them. Take it from me, i tried on a cheap one and it was not the same.  I have my eye on getting this leather corset custom made.( I don't think that I've seen anything more bad ass in my entire life or at least not since Naomi Campbell walked the runway for Atelier Versace in 2013)

Here are some photos from the event :

Let me be clear, the effects of waist training are not permanent and I don't  know if it's a good idea to wear anything ( other than gym clothes) with the goal of taking ten inches off of your waist. It honestly sounds unrealistic and painful. But, if you're looking for something hot, unique, and sexy  to wear to the next event( that you know everyone won't have), I would heartily recommend a Dark Garden Corset.  Until next time...